A Celebration of Generosity

In September of 2016, First PREMIER Bank/PREMIER Bankcard sponsored the first ever Jacks Bash - one of the biggest parties South Dakota State University has ever seen. Why did we host such a shindig? To celebrate the grand opening of SDSU’s brand new Dana J. Dykhouse Stadium. 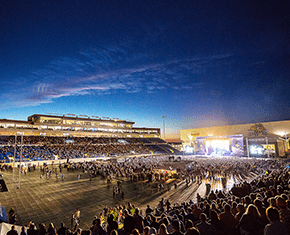 Jacks Bash was a tremendously successful celebration for all involved, causing incredible buzz on social media with close to 180 million total impressions on Facebook, Twitter, Instagram and Snapchat.

CLICK HERE to learn more about the PREMIER philanthropic donation that made the Dana J. Dykhouse Stadium possible.

Some of the highlights from Jacks Bash included: